Research Project
Why, despite the stunning changes around us, do some things in society change so little? Apparently societies have ways to maintain social structure despite, or even through, changes. This theme group takes the glass ceiling for women as an example. This phenomenon exists in all societies, albeit in different forms. Our means is agent-based modelling, which allows to re-play society in computer models, \u201cgrow it to show it. In this study we shall make agent-based models of groups of children. We’ll design the children using development psychology, sociology, and cultural psychology, and see what happens when we let them play.

Workshop
The workshop Modelling Social Reality: Emergence of the Glass Ceiling was held from 20 January through 24 January 2014, and took a foundational step forward by developing a generic model of social reality to be used in simulation. 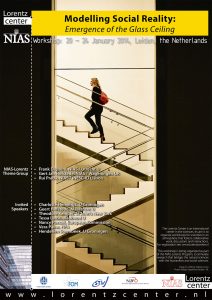 The Glass Ceiling
Why, despite the stunning changes around us, does the position of women in society change so little?